Enhanced Weathering As A Promising Solution to Climate Change

The increase in the concentration of atmospheric CO2 and other greenhouse gases (GHGs) are triggering adverse climatic changes. Unfortunately for us, this means a slew of severe climatic alterations, including extreme and variable rainfall, floods and storms. Much more severe than heat waves or droughts, long-term climatic changes are a major menace.

Why? Because a lot is under threat.

First in line is global food security 1,2. That too at a time when food demand is at an all-time high, thanks to dietary changes and a global population that is on the verge of reaching ~11 billion by 2100.

Needless to say, agriculture has emerged as one of the biggest contributors of climate change2,3. And it is a vicious cycle. Crop yields are decreasing because of the loss of arable soil as usage exceeds the natural rate of soil formation. Rapid depletion of nutrients are leading to increased usage of fertilizers made from finite sources. Overuse of fertilizers is increasing crop production costs, which, in turn, is driving up crop prices and leading to inflation.

On a global scale, the mean global temperature has exceeded pre-industrial levels by 1 degree celsius. But at the current warming rate of 0.18 °C per decade5, it’ll soon exceed the limit of 1.5 degree celsius set by the UN’s Paris Agreement4. In fact, we will cross the threshold in a matter of 30 years. The practical impossibility of transitioning into a carbon-free lifestyle, along with factors like ice sheet melts, energy imbalance and makes climate change a matter of grave concern.

The danger of sea-level rise comes with the loss of productive coastal marine and agricultural ecosystems. This in turn will result in displacement of people inland, adding further urgency to the need to offset CO2 emissions 2,5. The twenty-first Conference of the Parties (COP21) to the United Nations Framework Convention on Climate Change (UNFCCC) in Paris marked a turning point in the climate change debate. After a long time, the focus shifted from describing climate change to a commitment to seek innovative, sustainable solutions26 .

So, it needs to be addressed urgently. 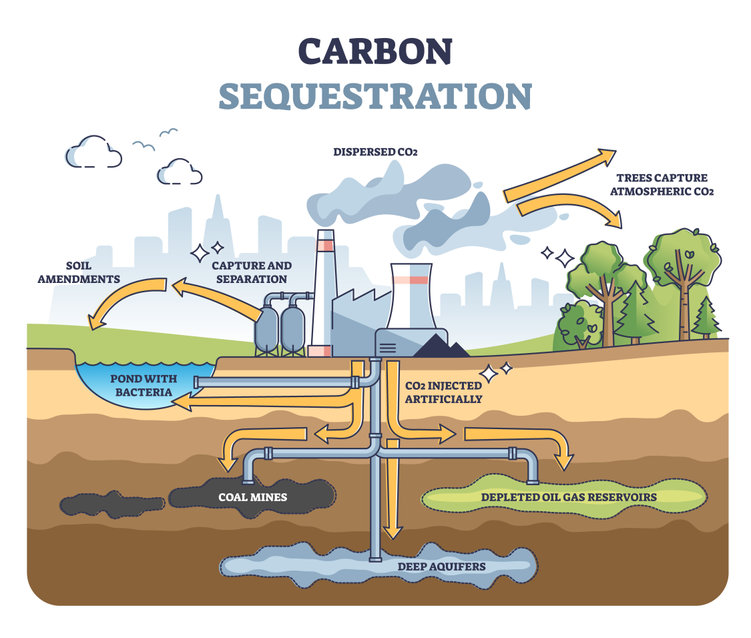 Enhanced Weathering As A Innovative Way of Carbon Sequestration

Is there a way to increase food production while reversing some of the adverse effects on the climate? Thankfully, yes. Today, we’ll explore such a possibility – Enhanced Weathering.

Through Enhanced Weathering, we can focus on accelerating the natural process of carbon sequestration with the production and addition of alkaline leachate. We can achieve this by mixing the soil of highly used croplands with crushed calcium (Ca) and magnesium (Mg)- bearing rocks6,7,8. Enhanced weathering helps in sequestering atmospheric carbon. How does the process work? Enhanced weathering fast tracks carbon dioxide reaction with minerals present in Mg- and/or Ca-rich rocks.

This is a natural process that helps moderate the concentration of atmospheric CO2, thus reducing its level to non-toxic ranges. In the long run, the process is capable of stabilizing climate change on an impactful geological time scale. That is good news indeed.

This particular carbon capture technique accelerates CO2 reactions with minerals contained in globally abundant, Mg- and/or Ca-rich rocks. By controlling atmospheric CO2, this process regulates climate on a geological timescale. Enhanced weathering, therefore, uses the oceans to store atmospheric CO2 in these stable dissolved inorganic alkaline forms (Fig. 1). The best part? The oceans are capable of storing around 38,000 PgC CO2, >45 times the current mass of carbon dioxide in the atmosphere. So there is no dearth of storage, now or in the future9. The inorganic carbon dissolved in the oceans can stay upto 100,000–1,000,000 years. Essentially, our oceans can be a permanent carbon storage reservoir going by human timescales10.

Another way of carbon sequestering is silicate weathering on land.

It does not involve the oceans. In this process, soil pore water chemistry results in the precipitation of secondary carbonate minerals15. Instead of the ocean, the precipitated carbon becomes a CO2 sink. However, this process delivers fewer benefits to climate, soils and crops. So we focus on the first method, it helps in:

But, like other potential large-scale CDR strategies 10,11,12, enhanced weathering still has a long way to go. We need to test it against different crops, soil types, climates, and spatial scales (Table 1) to understand how well it will do in real life scenarios. That said, experimental and small-scale evaluation of CO2 capture efficacy and permanency should be fast-tracked to validate this already proven strategy is worth its salt.

The most exciting part, perhaps, is that this strategy can be implemented on a large scale using present-day farming techniques and equipment.

Given that 11% of Earth’s total terrestrial surface area is utilized for crop production, enhanced weathering can help sequestrate carbon at a very large scale. Probably in a decade or two’s time.

In fact, recent research suggests that North America’s annual corn/soy harvest could sequester 0.2–1.1 PgCO2 or up to 13% of the global annual agricultural emissions. While the calculation is for the long run, it is still quite a beacon of hope13.

But is enhanced weathering induced carbon sequestration an easy goal to achieve? Not quite. There’s a catch.

Is there any major challenge impeding the progress of such carbon capture?

Turns out, the energy cost associated with mining, grinding and spreading the ground rock (even a basic one such as basalt) is a deterrent17. Because the current costs are uncertain and variable, large scale implementation of the process is difficult. Currently, operational costs hover around US$52–480 tCO2 –118. That’s a lot, especially if you consider implementation on a large scale across different geographies. We need grinding and milling technology that uses renewable energy resources like bioenergy. Then the costs can be brought down to US$39–100 tCO2 –1 (US$140–360 tC–1)19.

A turning point could be starting off with areas of high intensity agriculture which has:
● An abundance of basalt
● Rock-crushing equipment
● Logistics support
● Agricultural spreaders

North America13 or the United Kingdom18 could be natural choices.

But that’s not all. The rate and speed of implementation matter as well.

Rapid deployment of CDR strategies is the only way to significantly offset carbon emissions. Only then can it help in reversing the adverse impact of climate change and its environmental, ecological, and economic impact. 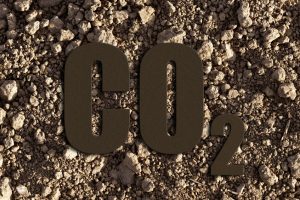 The current method of carbon dioxide sequestration using enhanced weathering in forested areas7 and oceans21,22 focuses on ultramafic olivine rich rocks. Ultramafic rocks, found in commercial mines, weather very fast and are an easy choice. More than half of ultramafic rocks comprise olivine by weight. It is one of the fastest weathering silicate rocks at pH<6 and can capture up to 0.8–0.9 tCO2 per ton of rock dissolved18.

So, large scale implementation of carbon sequestration using ultramafic rocks can lead to the introduction of harmful chemicals in the food chain.

However, if we utilize continental flood basalts in place of ultramafic rocks, we could be in a better place. Basalt not only has a lesser concentration of both chromium and nickel, it has higher concentrations of phosphorus. They have a greater utility for croplands.

The rock weathers fast and adds nutrients essential to crop growth to the soil 23. If deployed correctly, the use of basalt in carbon sequestration can mitigate environmental risks associated with the process of enhanced weathering24.

But Carbon Sequestration is the Way to Go

When deployed in conjunction with afforestation, reforestation, and feedstock crops used in BECCS and biochar, we can sequestrate more and more carbon from the environment at cheaper operating costs.

The mass of rock distributed onto land could be reduced if applications were optimized. For example, restricting the application to 90% of the most productive regions can improve cost-effectiveness of the technique significantly. This is equivalent to 75% of the agricultural land used for annual crops (6.8 × 108 ha) (Fig. 3a), and will reduce the required rock mass to 7–20 Pg yr–1.

China, USA, India, Russia, and a few other European nations like Germany and France will be the top nations who will be able to sequestrate carbon at a rate significant enough to bring about change.

But then we have to make the most of it. Using biotechnology, we have to come up with crop varieties that derive their nutritional requirement from soil enriched with crushed silicate rocks. It’ll also help fight off pests and other diseases afflicting crop production today.

Adding silicate rocks to soil will certainly help reduce the emissions of long lingering greenhouse gases like N2O and avert CO2 emissions due to liming.

We’re sure that by now you’re aware of the many advantages of carbon sequestration with rocks in agricultural applications. Here’s a quick sneak peek of all its potential ancillary benefits:
1. Allows natural and harmless fertilization of crops
2. Reduces dependence on finite resources
3. Decreases the usage of artificial fertilizers
4. Neutralizes soil and ocean acidification
5. Restores essential micronutrients like rock phosphate20
6. Suppresses and averts N2O and CO2 emissions
7. Replaces soil lost to erosion
8. Protects crops against pests, diseases, etc.
9. Prevents the intake of toxic chemicals like silica

Because we are rapidly pacing towards irreversible climate change, urgent implementation of mitigation strategies are the need of the hour. Enhanced weathering can be implemented on agricultural lands, in the ocean, and on beaches. It is a versatile method of capturing and removing atmospheric carbon dioxide. While admittedly there is still a lot of research, trials, and implementation issues that need to be addressed, carbon sequestration is still the way to go.

13. Kantola, I. B. et al. Potential of global croplands and bioenergy crops for climate change mitigation through deployment for enhanced weathering. Biol. Lett. 13, 20160714 (2017).

No comments to show.